Hey folks, thanks so much for continuing to visit this blog, even though my activities have been 100% occupied with building theEnclosure.ca and the last article I posted here was all the way back in February. As promised, I intend to post more technical themed articles to this blog and use the project journal on my build site for my day to day thoughts and tribulations on building an energy efficient home.

So, it is time for an article that provides a primer into Anchor Bolts. In the days of old, a concrete placing crew would just embed a 1/2" anchor every 4ft or so and call it a day.


Most dwellings had either small cripple walls placed above the foundation wall or had the floor joist assembly sitting right on top of the sill plate. Both of these were able to easily accommodate the location of the anchor bolt with little effort.


Modern construction has changed a great deal in this regard. In areas of high seismic activity, the location of anchor bolts is critical to meet either the code prescriptive path to seismic rigidity, or an engineered path. For us @ theEnclosure.ca, we were forced by the Municipality to upgrade from the Building Code prescriptive path and instead use the prescriptive path laid out in Canadian Wood Council's Engineering Guide For Wood Frame Construction Part C.


In Part C, the requirements for anchor bolts for my region (Lower Mainland BC, Canada) are laid out as follows:

- There must be two bolts minimum per braced wall (seismic) panel

- The bolts must be installed no more than 1.64 ft from each end of a foundation wall

So now, it is critical that prior to your concrete crew coming, all anchor bolt locations are marked out on the form work to comply with the newer seismic regulations. It is also important that the setback from the foundation wall face is identified to ensure that the anchor bolt will miss objects like rimboards (engineered wood) or rim joists (real wood).


For our construction, we had an added level of difficulty surrounding the placement of these bolts. Our design includes a dropped floor assembly that is flush with outside grade in order to meet the requirements of SAFERHome Society. But code still requires that the foundation project 6" above grade (BCBC 9.15.4.6) which results in a concrete foundation stub projecting above the floor surface.

As my wall framing was then mounted directly to the foundation, it was critical that in addition to meeting the seismic requirements, I also had to ensure that they were placed to miss my wall stud framing. I was about 85% successful in this endeavour. The rest had to be cut off and replaced with drill-in anchors, which my inspector stated would accept for a limited qty.


SO, you have all your anchor bolts embedded at the right locations, lets add the washer and nut and call it a day - right? From a code perspective, you would be right. But there is a best practice when it comes to anchor bolts. I have to thank one of my Home Inspection client's Nikolas for this information.


Turns out that the washer makes a perfect wedge to split the plate apart during an earthquake as the bolt bends under the shear loads exerted by a quake. Who knew??? I reviewed the article that Nikolas sent and written by Howard Cook titled "The importance of Plate Washers"


Howard retrieved the following graph from the Los Angeles Building and Safety department (a group that knows a little bit about earth quakes don't you think!) 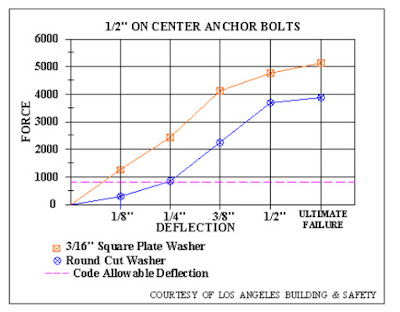 You will see that at every point along the graph, that the wall using a plate washer deflected less for a given force when compared to the round cut washer. By introducing a 3" x 3" plate, you are able to better prevent the bolt from bending under shear and preventing the splitting of the sill plate. The mentioned article includes a sketch by Nels Roselund that shows the reactions involved. 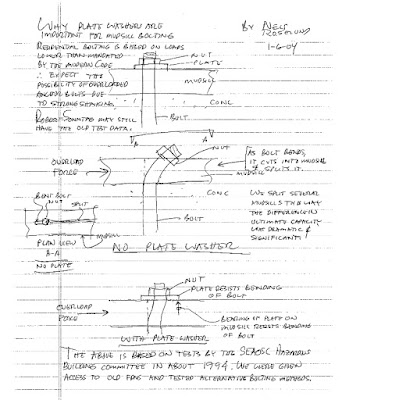 Based on this information, we elected to use the 3"x3" plates on The Enclosure but did run into problems on many of the bolt locations. Unless the anchor bolt was dead centre in the 2x4 sill plate, there was not enough room between the sheathing and the bolt or the inside face of the stud and the bolt, to place the plate. SO we used the plates for as many of the bolts as possible and then just the standard washers for the rest.

Howard has also published an article titled Bolting: Attachment Of The Mudsill To The Foundation for those interested in additional reading. Nikolas also forwarded the article QuakeCheck: When the big one comes, will your home be "Safe enough to stay?" which made for a great read to further brush up on this subject and how to address it.


If you have an older home, it may be time to upgrade your anchorage. Is it not worth a few hundred dollars and one day of your weekend to make your family as safe as possible in a seismic event?


Thanks for visiting!
Posted by SENWiEco Designs at Tuesday, August 30, 2016