An interactive session with Joe Lstiburek and leading professionals to discuss building science trends and concepts. Attendees will gather for a two-hour open dialogue on preselected topics. The topics are selected upon consultation with speakers, event committee, and industry professionals in consulting, construction, and governmental sectors.


For more information and registration - click here.
Posted by SENWiEco Designs at Wednesday, July 31, 2013 No comments:


Posted by SENWiEco Designs at Saturday, July 27, 2013 No comments:

Cooking with gas? You may have air quality that would be ilegal if found outside! (Updated)

Energy Department’s Lawrence Berkeley National Laboratory finds that "interior air quality in homes that cook with a gas stove can reach pollutant levels that would be illegal if found outdoors."

"Previous studies have found that range hoods vary widely in their effectiveness at removing pollutants. In a laboratory study of seven models ranging from $40 to $650, Singer found capture efficiencies ranging from 15 to 98 percent, and also found that a higher price did not guarantee better performance."

*** Update
A more complete new release published by the Berkeley Lab can be found here.

Unfortunately, it is not a front wheel drive! 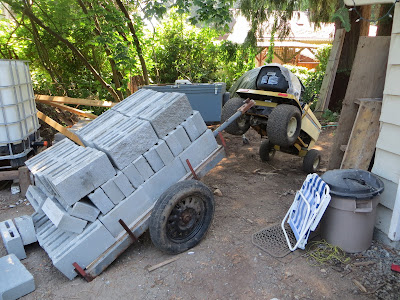 Posted by SENWiEco Designs at Sunday, July 21, 2013 No comments:

The first was spurred on by a Knowledge Network documentary I watched this evening on Enhanced Geothermal Systems (EGS).  This is a process being develop to bring Geothermal potential to regions of the world that do not have easy access to hot rock, water reservoirs, and fracturing of the hot rock to allow harvesting of the steam (currently only accompanying about 10% of the earths surface and may be expandable to 60-80% utilizing EGS).  The process involves creating the underground water reservoir in areas that have dry hot rocks and using techniques from the natural gas industry to fracture the rock after creating a 'man made' water reservoir over a hot rock location (rock in close proximity to Magma).  The result is the same super-heated steam available in true geothermal regions.  The documentary also covers research into new drilling techniques that use flame jet instead of a drill bit to drill through solid granite up to 10X the speed of conventional drilling.

This is a National Geographic production and I was unable to find an official source for the video but did find this YouTube video in English with Portuguese subtitles.

The second potential energy source is new way to create nuclear power.  Nuclear power has created a huge divide between those that support it and those that do not.   On the one hand it can create almost limitless volumes of energy with relatively low emissions.  The catch however is the technology utilized throughout the world is very inefficient (3-5% of the energy is utilized in the fuel rods before they become waste) and this leaves behind spent fuel with a very high radio active content and in huge volumes.  The real drawback is that this waste has a half life in the several hundred of thousands of years.  The final concern, propelled to the forefront after the devastating Japan earthquake in 2011, is that current technology is very hard to stop once it gets going.  The Fukushima nuclear plant will take decades to cool down the cores of the three stricken reactors and decommission the plants (it is taking 3000 people daily to keep the reactors cool, 2 years after the explosions).

But what if another technology existed that would burn the fuel to much higher efficiency,  would created a fraction of the waste volume, the waste would have a half life in the hundreds of years instead of hundreds of thousands of years,  and the fusion process could be shut down almost instantaneously and without human intervention in case of an emergency?  Liquid Fuel Thorium Reactors (LFTR) promise just that. This reprint from the American Scientist is a great introduction to the technology and the missed opportunities that we have had.  It also outlines some of the challenges to switching technologies in the future (mostly political).

Some benifits to LFTR:

Posted by SENWiEco Designs at Saturday, July 06, 2013 No comments:

China or Paper - What should you eat off of?

GreenBuildingAdvisor.com looks at the energy and carbon comparison between disposable plates and china plates. http://goo.gl/OYn5C

As usual, the results are not black and white and highly depended on how the china is washed.
Posted by SENWiEco Designs at Friday, July 05, 2013 No comments:

Their report, published here, indicates there are some savings to be realized under some conditions, but that we have a long way to go before this can be common place.

As my time is 'free', I plan to spend up to a month deconstructing my house before starting construction on my upcoming build.  The items I plan to reuse, sell, salvage, give away, and recycle include:


Stuff that will probably go to the landfill:
The last item is the concrete slab.  I would like to have it ground up and be able to use it as additional granular material for back-filling but at the very least I will find a place where it is needed as fill.

As you can see, my plans are ambitions and if successful, I would  divert over 90% by weight or volume away from the typical landfill process. Some of the effort like stripping the wiring or the paint of the siding will have to wait till after the build process. But with some planning and a little hard work, this should all be easily achievable, bring in some income or good karma and significally lower the carbon output of my demolition process.

Thanks for reading and as always, I encourage your comments.

Posted by SENWiEco Designs at Wednesday, July 03, 2013 No comments: